Many signal cables are connected to brain and the body of the pilot who should also call it a cyborg. So that a mask is carried out and, as for the face, man's original form does not understand the body with a special metal suit, either
It is alike and is covered with the cover.
Human body Various kinds It is dipped in solution required for life maintenance. again The project was called only "omega" and development continuation was carried out. 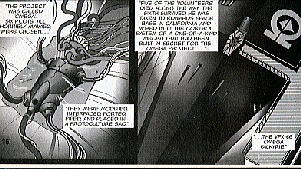 Since the mind and body which do not have a problem in the obedience to emotion-instability or a command needed to choose healthy and excellent talented people as this human body subject, although the selection reached to an extreme of difficulty
Desire or choosing six pilots who can agree the intelligence office of an integrated space army on the body of fault without hand and foot which takes various means and fulfills conditions at last
It was able to do.

The body is still more large-sized than VF-4, and seems to be the design which put emphasis on speed, a cruising range, and high altitude and space move power rather than a dogfight. Moreover, to the attack of a missile etc., it has the next-generation laser point defense system (LPDS) which performs shooting high-speed [ despite powerless ] a little, and exact. Size is guessed from the form of wreckage and parts.

The main technical spec. is as being the next, although there is also a still indefinite point, since data were lost.

In addition, X signs are XVF - / YF - It is shown nothing that it is an experimental model on condition of practical use that it is before a number to the last

Unmanned , use cyborg - unit pilot , but one man crew in the test

Other detail is Unknown